The history of this resort area began with college regattas held there since the mid 1800s. The White City Shopping Center takes its name from the White City Amusement Park which occupied the site from 1905 to 1960. 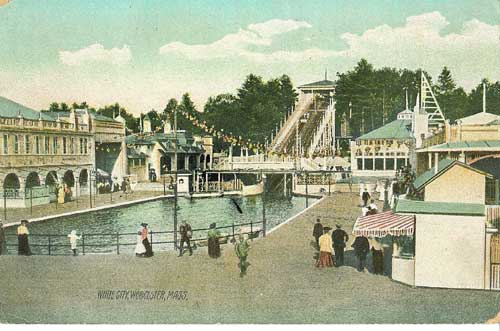 By the 1940s, the park began to suffer declines in attendance due to development elsewhere along the lake’s shores. White City, once a park that featured ‘50,000 Electric Lights,’ shut down on Labor Day, 1960 and the White City property was sold in November of that same year. The buyer of the White City property, Albert Shore, developed the land into a shopping center and movie theater complex shortly after the amusement park’s closure. The retail complex still bears the White City name, though the movie theater, White City Cinemas, was shut down in recent years.

In its latter days as an amusement park, White City had begun to lose its luster, but many local residents still remember fondly the fun filled summers, the excitement, the rides, the food, the place to go with friends and family.

Today, we look to the past for inspiration, and look to the future with new ideas and new plans to make White City a place where new memories can be recorded.  Our belief is that a shopping center is more than just a collection of stores, but a center where people gather together –  perhaps for shopping, perhaps for dining – but a social center nonetheless.

Our recent renovations are just the beginning of a long term commitment to make White City a center for community and commerce.

While we work to renovate the look of White City, we are also working with the community to help promote the beautiful natural resources that surround us, working to promote ways that a community of commerce can help build a greater community for residents, families, professionals, and the many colleges that have always been a part of this neighborhood.